Will Trump’s Tough Talk On Immigration Cause A Farm Labor Shortage? 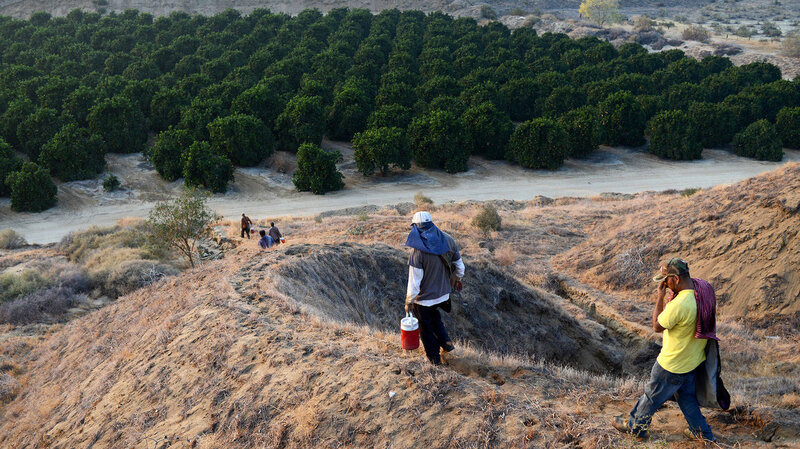 Farmworkers head home after a day of picking at a large citrus farm near Bakersfield, Calif.

In the Central Valley, there’s a bumper sticker you see all over the place. It’s shaped like California, and reads “My job depends on Ag.” In California, that agriculture depends on immigrant labor.

Many farmers in the state supported President Donald Trump despite his hard-line stance on immigration. So as the new Trump administration takes office, what’s the thinking of those involved in the region’s biggest industry?

Just after the workday ends, men in dirty jeans and work boots stream into a small record store in the farming town of Mendota. Racks of CDs and music posters line the walls, but nobody’s browsing. The guys are in line to use the store’s wire transfer service. They’re sending money home to families in Mexico and El Salvador.

“We just came in from the fields — nine hours pruning pistachio trees,” says a weary-looking man in a dust-covered sweatshirt. He’ll say only that his name is Pablo because, like all the farm workers I talked to for this story, he’s in the country illegally.

I ask him what he thinks of Trump’s tough talk on immigration. Pablo’s answer includes a strong, derogatory word.

“You think a gringo’s gonna be pruning pistachios?” he asks me in Spanish. He says in his 17 years working the California fields, he’s seen only Latinos — mostly immigrants — doing this work. So he’s not buying the idea that he’s taking away a job from a U.S. citizen. 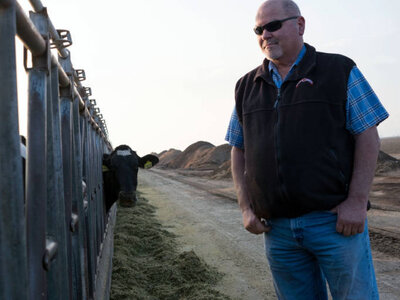 I also visit Steve Murray’s farm outside Bakersfield, where a few workers are crouched among rows of strawberries that will sell at farmers markets around the region. As Murray watches them work, he explains why he needs foreign workers.

Even though this area has one of the highest unemployment rates in the state, Murray says he has a hard time finding people to pick his fruit. He didn’t vote for Trump, and he says his business would suffer if the new administration carries through on plans for mass deportations of immigrants.

An hour north, near Porterville, dairy farmer Tom Barcellos is feeling more optimistic. He tells me he met Trump, and he’s betting the president-elect’s business-friendly side will win out.

“Of course you heard about him saying ‘build a wall,’ ” Barcellos says. “Well, what he told us is that wall is going to have a door in it, and we’re going to talk to the right people that want to come in and work, and they’re going to have an opportunity to do that.”

There’s already an agricultural guest worker program — the H-2A visa program. And use has gone up steadily over the past five years, as fewer workers enter the country illegally.

But every farmer I talked to complained about it, calling it cumbersome and expensive. Some experts speculate a Trump administration might strip away worker protections and create a program that’s more favorable to employers.

Barcellos says Trump assured him that people who have been working in the United States for years will have a chance to get temporary visas, too. But, Barcellos says, “Citizenship … that’s a different animal and let’s not mix up the two.”

A path to citizenship doesn’t seem likely under Trump. And not every farm worker I spoke with wants U.S. citizenship.

Take 36-year-old Eugenio. I meet him while he’s pruning pistachio trees on Murray’s farm near Bakersfield. Eugenio’s wife and kids are in Mexico. “So I make a little money, then go back to Oaxaca, where I’m building a house,” he says.

Eugenio tells me he’s crossed the border eight times illegally. But he says border security is so tight now he hasn’t been home to Mexico in five years. “I’m trying to figure out how to come with a work visa,” he says. “I’d really like that.”

Then there are people like Elfego, who’s working on a tree nearby. He doesn’t like the idea of visas. He’s been in the United States 17 years. His family is here. “What would happen if Trump starts giving visas to people over there?” he asks.

Elfego worries legal guest workers from Mexico would replace him. “What happens with those of us who are here? He’ll deport us because we’re illegal,” he says.

Some worry the future under President Trump could bring more immigration raids, less enforcement of farmworker protection laws or the forced use of E-Verify, a government tool for checking employment eligibility.

For now, the only thing certain is that the Central Valley’s $35 billion agricultural economy depends on policies that balance the needs of both growers and workers.

This story comes to us from NPR member station KQED in California. It first aired as part of The California Report.